Difficulties 1: Tools
Say, in your company, you are using Visual Studio 2003 and in order to improve your skill, you want to put give more time to learn it at home. But, the problem is you do not have Visual Studio 2003 at home. You went to check and realize that there is one which is free called Visual Web Developer 2005, but it is for ASP.NET 2.0 only.

* During the earliest version of ASP.NET, in some places, you might not see the version number. Instead they just put ASP.NET. But this is actually refering to ASP.NET 1.0 version.

Certains terms in ASP.NET could be quite confusing. And seems like those to come out with this terms, do not realize this problem. Otherwise, there will be more articles and diagrams to clear up this confusion.

More examples: dataset, datagrid, gridview, dataadapter, datareader, datatable, dataview, detailsview, datalist, formview and repeater. Some terms remain the same from .NET 1.1 to .NET 2.0, but some are new terms from .NET 2.0.

Solution: The second diagram at the bottom at this page helps to clear up some of the above terms.

Lastly, please correct me if I got any inaccurate information here. Thanks in advance.

During implementation stage, what we normally do is we build (or compile) it as usual and then copy and paste the dll file from local to development server for testing.

And after the testing is succesfully, we moved the dll from development server to staging server for testing again and then to production server.

Everything seems fine but one thing I didn’t realize (or easily forget to do) is there is a release build. The difference between the two:

I tried. Using debug build, my dll file size is 48 KB, while using release build it is just 44 KB. Not big difference, but imagine if you have many dlls, it counts a lot.

In conclusion, we should use debug build during our local development while release build during implementation.

After reading some articles and discussions on this topic, my conclusion is:

When you have many related functions, you can consider to group them together using Region.

Example, if you have four functions which are related to Paging, you can just add a region like below (ASP.NET 1.1, VB.NET syntax):


Now, go to your Visual Studio 2003. Click Edit > Outlining > Collapse to Definitions, you will see the below: 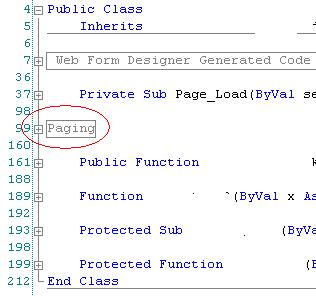 It is very simple to do, yet useful.